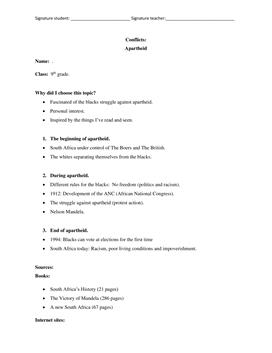 I've chosen the subject Apartheid, and I did this because I thought it would be interesting to read and learn some more about it, you know, I've seen the movies “Goodbye Bafana” and “Catch a fire” and it was really these movies, which kind of inspired me to take this subject. And I just think that I'll get started.

In 1910 South Africa was under control of the British and the Boers, who were the Dutch. They had been fighting each other for hundreds of years, but they found out that if they joined forces they were strong enough to rule South Africa and control the Africans. So they declared South Africa independent, but only gave power to the white people. The separation between the white and the colored people wasn't official back then, because that was just how it was. But in 1948 a party was elected - by the white people only - to rule the government. And this party was called the National Party, and they made the separation between the colored people and the white people official by making a new law... Køb adgang for at læse mere Allerede medlem? Log ind