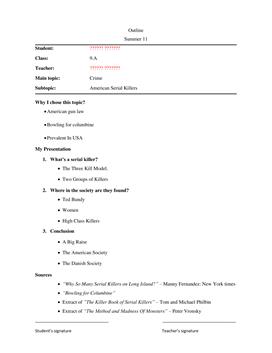 What's a typical serial killer?
I started to think about serial killers, when I heard about the American gun law in the documentary “Bowling for Columbine”. I wondered if serial killers were also using guns to kill, and if not how'd they do it then? I've also heard that serial killers are far more prevalent in USA. This seemed inter-esting to me, and made me wonder, why they'd so many and we nearly none. The fact, that we're all the same and not a bunch of different species, made me think, that this topic had to be explored and studied some more.

The famous American Army psychologist G.m. Gilbert, once after meeting Herman Göhring said “Evil, I think, is the absence of empathy”. I agree, since killers often know how their victim feels, but they don't understand how to feel with them, and show some empathy. If you believe the FBI, then this might be the cause of the bad childhood serial killers often experience. Someone might have brainwashed the child into believing that the only thing the child can do is to satisfy his master's need, this makes the child believe that... Køb adgang for at læse mere Allerede medlem? Log ind