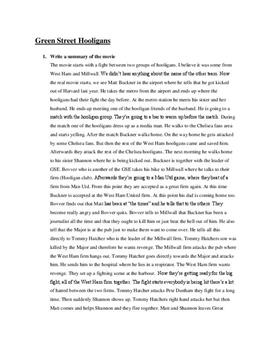 1. Write a summary of the movie
The movie starts with a fight between two groups of hooligans. I believe it was some from West Ham and Millwall. We didn't hear anything about the name of the other team. Now the real movie starts, we see Matt Buckner in the airport where he tells that he got kicked out of Harvard last year. He takes the metro from the airport and ends up where the hooligans had their fight the day before. At the metro station he meets his sister and her husband. He ends up meeting one of the hooligan friends of the husband. He is going to a match with the hooligan group. They're going to a bar to warm up before the match. During the match one of the hooligans dress up as a media man. He walks to the Chelsea fans area and starts yelling. After the match Buckner walks home. On the way home he gets attacked by some Chelsea fans. But then the rest of the West Ham hooligans came and saved him. Afterwards they attack the rest of... Køb adgang for at læse mere Allerede medlem? Log ind