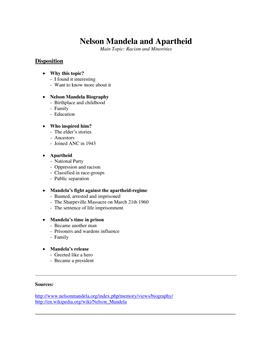 Why this topic?
Nelson Mandela Biography
Who inspired him?
Apartheid
Mandela's fight against the apartheid-regime
Mandela's time in prison
Mandela's release
Sources:

Why this topic
I have chosen my topic Nelson Mandela and Apartheid, because I found it very interesting I have heard something abort him but I never got the whole story

Nelson Mandela Biography
Mandela was born in a little village in Transkei, on July 18th, 1918.His mother was Nonqaphi Nosekeni and his father was Henry Mandela. His father was the principal councillor to the Acting Paramount Chief of the Thembu. When Mandela was nine, his father died. After an education at the local mission school, he was sent to the Clarkebury Boarding Institute for his junior certificate, later he was signed in for university. He studied at the University College of Fort Hare for the Bachelor of Arts Degree. He was suspended from college for joining in a protest boycott. In 1942 Mandela completed his BA at the University of South Africa and after that he studied Bachelor of Laws for a short time without graduating.

Who inspired him
When Mandela was a child by Hearing the elder's stories about his ancestor's courage during the wars of resistance, he also wanted to fight for freedom and for his people. While Mandela was a... Køb adgang for at læse mere Allerede medlem? Log ind