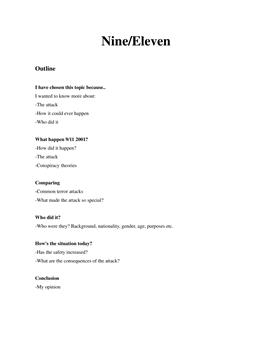 Outline
I have chosen this topic because..
What happen 9/11 2001?
Comparing
Who did it?
How's the situation today?
Conclusion
Sources

I have chosen this topic because
I thought it was very interesting and because I've always wanted to know more about the attack. I have also chosen it because I think its fascinating that an attack like this can ever happen.
Sunday the 11th September a big terror attack occurred in NYC. That is something we know for sure, but a lot of questions is still flowing around, like how did world trade center 7 crash, how could it happen and where is the airplane that crashed in Pennsylvania? I'm not sure anyone know it for sure, many people have different meanings, but I have found some of the suggestions.

The attack
4 airplanes was hijacked Sunday the 11th September 2001. They were like suicide 'planes', they were meant to crash with 4 big buildings in the NY. Twin Tower(World Trade Center), Pentagon and United States Capitol. But 'only' 3 of the 4 targets was hit, twin towers and pentagon. The last... Køb adgang for at læse mere Allerede medlem? Log ind