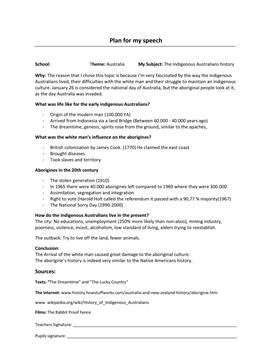 Why?
The reason that I chose this topic is because I'm very fascinated by the way the indigenous Australians lived, their difficulties with the white man and their struggle to maintain an indigenous culture. January 26 is considered the national day of Australia, but the aboriginal people look at it, as the day Australia was invaded.

What was life like?
The modern man originated in Africa about 100.000 years ago. He wandered out to all the continents of the world, some went to Europe, while others went to Asia. We are going to focus on the Asians. It took them a long time to come that far, because they did not just keep walking. They walked for maybe a week or so, and then they settled down for maybe a month or a whole year. So they were nomads. Some settled down in indo Asia, (Vietnam and Indonesia) but a group... Køb adgang for at læse mere Allerede medlem? Log ind