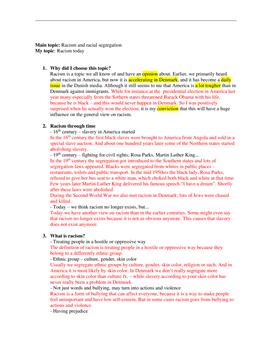 1. Why did I choose this topic?
Racism is a topic we all know of and have an opinion about. Earlier, we primarily heard about racism in America, but now it is accelerating in Denmark, and it has become a daily issue in the Danish media. Although it still seems to me that America is a lot tougher than in Denmark against immigrants. While for instance at the presidential election in America last year many especially from the Sothern states threatened Barack Obama with his life, because he is black – and this would never happen in Denmark. So I was positively surprised when he actually won the election; it is my conviction that this will have a huge influence on the general view on racism... Køb adgang for at læse mere Allerede medlem? Log ind