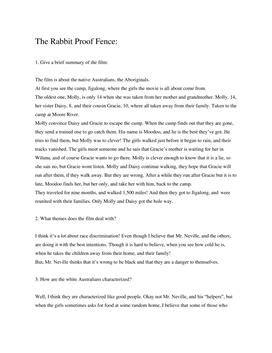 1. Give a brief summary of the film:
2. What themes does the film deal with?
3. How are the white Australians characterized?
4. How is Mr. Neville characterized?
5. What is Mr. Neville's job?
7. Is Mr. Neville doing the right thing?
8. What does Mr. Neville mean?
9. How do the white men, at Jigalong, feel about the removal of the girls?
10. What was the purpose of the Rabbit Proof Fence?
11. How would it effect you if you had been taken away from your family?
12. Self-esteem?
13. Explain Mr. Neville's final statement?

1. Give a brief summary of the film:

The film is about the native Australians, the Aboriginals.
At first you see the camp, Jigalong, where the girls the movie is all about come from.
The oldest one, Molly, is only 14 when she was taken from her mother and grandmother. Molly, 14, her sister Daisy, 8, and their cousin Gracie, 10, where all taken away from their family. Taken to the camp at Moore River.
Molly convince Daisy and Gracie to escape the camp. When the camp finds out that they are gone, they send a trained one to go catch them. His name is Moodoo, and he is the best they've got. He tries to find them, but Molly was to clever! The girls walked just before it began to rain, and their tracks vanished. The girls meet someone and he sais that Gracie's mother is waiting for her in Wiluna, and of course Gracie wants to go there. Molly is clever enough to know that it is a lie, so she sais no, but Gracie wont listen. Molly and Daisy continue walking, they hope that Gracie will run after them, if they walk away. But they are wrong. After a while they run after Gracie but it is to... Køb adgang for at læse mere Allerede medlem? Log ind