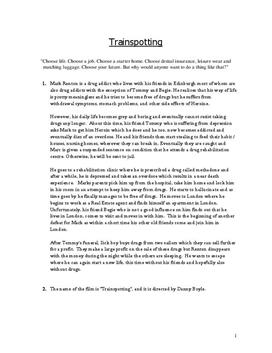 1. Mark Renton is a drug addict who lives with his friends in Edinburgh most of whom are also drug addicts with the exception of Tommy and Begie. He realizes that his way of life is pretty meaningless and he tries to become free of drugs but he suffers from withdrawal symptoms, stomach problems, and other side effects of Heroine.

However, his daily life becomes grey and boring and eventually cannot resist taking drugs any longer. About this time, his friend Tommy who is suffering from depression asks Mark to get him Heroin which he does and he too, now becomes addicted and eventually dies of an overdose. He and his friends then start stealing to feed their habit / houses, nursing homes, wherever they can break in. Eventually they are caught and Marc is given a suspended sentence on condition that he attends a drug rehabilitation centre. Otherwise, he will be sent to jail... Køb adgang for at læse mere Allerede medlem? Log ind