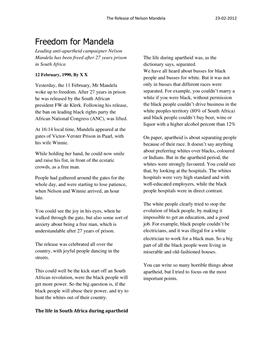 The Release of Nelson Mandela.

Yesterday, the 11 February, Mr Mandela woke up to freedom. After 27 years in prison he was released by the South African president FW de Klerk. Following his release, the ban on leading black rights party the African National Congress (ANC), was lifted.

At 16:14 local time, Mandela appeared at the gates of Victor-Verster Prison in Paarl, with his wife Winnie.

While holding her hand, he could now smile and raise his fist, in front of the ecstatic crowds, as a free man.

People had gathered around the gates for the whole day, and were starting to lose patience, when Nelson and Winnie arrived, an hour late.

You could see the joy in his eyes, when he walked through the gate, but also some sort of anxiety about being a free man, which is understandable after 27 years of prison... Køb adgang for at læse mere Allerede medlem? Log ind