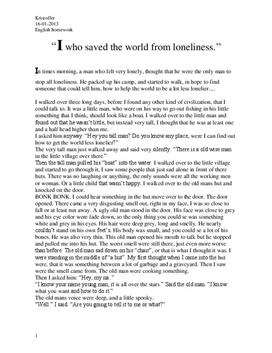 Novelle: Engelsk Fortælling: I who Saved the World from Loneliness

“I who saved the world from loneliness.”
The list:

“I who saved the world from loneliness.”

In times morning, a man who felt very lonely, thought that he were the only man to stop all loneliness. He packed up his camp, and started to walk, in hope to find someone that could tell him, how to help the world to be a lot less lonelier....

I walked over three long days, before I found any other kind of civilization, that I could talk to. It was a little man, who were on his way to go out fishing in his little something that I think, should look like a boat.

I walked over to the little man and found out that he wasn’t little, but instead very tall, I thought that he was at least one and a half head higher than me.
I asked him anyway: “Hey you tall man? Do you know any place, were I can find out how to get the world less lonelier?”... Køb adgang for at læse mere Allerede medlem? Log ind