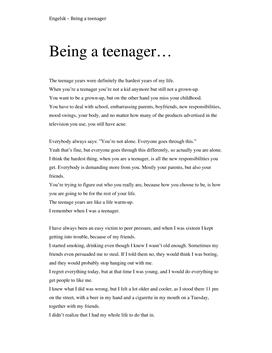 Opgave i Engelsk om det at være teenager (Being a Teenager).

The teenage years were definitely the hardest years of my life.
When you're a teenager you're not a kid anymore but still not a grown-up.
You want to be a grown-up, but on the other hand you miss your childhood.
You have to deal with school, embarrassing parents, boyfriends, new responsibilities, mood swings, your body, and no matter how many of the products advertised in the television you use, you still have acne.

Everybody always says: ”You're not alone. Everyone goes through this.”
Yeah that's fine, but everyone goes through this differently, so actually you are alone.
I think the hardest thing, when you are a teenager, is all the new responsibilities you get. Everybody is demanding more from you. Mostly your parents, but also your friends.
You're trying to figure out who you really are, because how you choose to be, is... Køb adgang for at læse mere Allerede medlem? Log ind