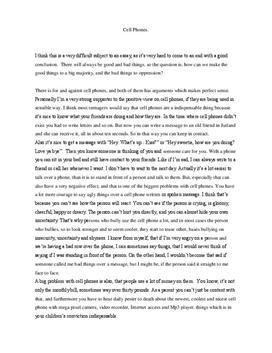 I think this is a very difficult subject to an essay, as it’s very hard to come to an end with a good conclusion. There will always be good and bad things, so the question is, how can we make the good things to a big majority, and the bad things to oppression?

There is for and against cell phones, and both of them has arguments which makes perfect sense. Personally I’m a very strong supporter to the positive view on cell phones, if they are being used in sensible way. I think most teenagers would say that cell phones are a indispensable thing because it’s nice to know what your friends are doing and how they are.

In the time where cell phones didn’t exist you had to write letters and so on. But now you can write a message to an old friend in Jutland and she can receive it, all in about ten seconds. So in that way you can keep in contact."... Køb adgang for at læse mere Allerede medlem? Log ind