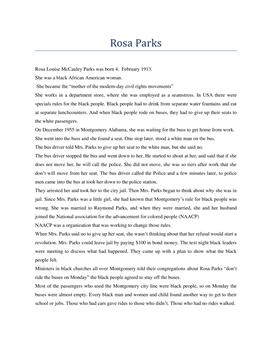 Rosa Louise McCauley Parks was born 4. February 1913.
She was a black African American woman.
She became the “mother of the modern-day civil rights movements”
She works in a department store, where she was employed as a seamstress. In USA there were specials rules for the black people. Black people had to drink from separate water fountains and eat at separate lunchcounters. And when black people rode on buses, they had to give up their seats to the white passengers.
On December 1955 in Montgomery Alabama, she was waiting for the buss to get home from work.
She went into the buss and she found a seat. One stop later, stood a white man on the bus.
The bus driver told Mrs. Parks to give up her seat to the white man, but she said no.
The bus driver stopped the bus and went down to her. He started to shout at her, and said that if she does not move her, he will call the police. She did not move, she was so tiers after work that she don't will move from her seat. The bus driver called the Police and a few minutes later, to police... Køb adgang for at læse mere Allerede medlem? Log ind