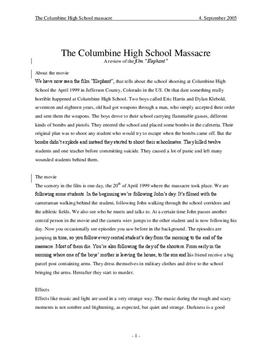 About the movie
The movie
Effects
Conclusion
My opinion

About the movie
We have now seen the film ”Elephant”, that tells about the school shooting at Columbine High School the April 1999 in Jefferson County, Colorado in the US. On that date something really horrible happened at Columbine High School. Two boys called Eric Harris and Dylan Klebold, seventeen and eighteen years, old had got weapons through a man, who simply accepted their order and sent them the weapons. The boys drove to their school carrying flammable gasses, different kinds of bombs and pistols. They entered the school and placed some bombs in the cafeteria. Their original plan was to shoot any student who would try to escape when the bombs came off. But the bombs didn't explode and instead they started to shoot their schoolmates. They killed twelve students and one teacher before committing suicide. They caused a lot of panic and left many wounded students behind them.

The movie
The scenery in the film is one day, the 20th of April 1999 where the massacre took place. We are following some students. In the beginning we're following John's day. It's filmed with the... Køb adgang for at læse mere Allerede medlem? Log ind