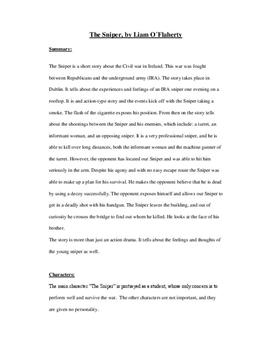 The Sniper is a short story about the Civil war in Ireland. This war was fought between Republicans and the underground army (IRA). The story takes place in Dublin. It tells about the experiences and feelings of an IRA sniper one evening on a rooftop. It is and action-type story and the events kick off with the Sniper taking a smoke. The flash of the cigarette exposes his position. From then on the story tells about the shootings between the Sniper and his enemies, which include: a turret, an informant woman, and an opposing sniper. It is a very professional sniper, and he is able to kill over long distances, both the informant woman and the machine gunner of ...

Setting:
The story takes place in Dublin, which at that time was the scene of the civil war. It involves a simple description of a street, two rooftops, and a bridge. The author... Køb adgang for at læse mere Allerede medlem? Log ind